I’m proud of the recent run of the SilverHook powerboat between Key West and Cuba not only because our team broke the world record, but also because we are transforming the sport of offshore powerboat racing. A key factor is data-driven artificial intelligence.

Not only does collecting and analyzing live data help us drive the boat faster, more reliably and more safely, but cloud computing and advanced satellite telemetry let us stream the adventure to any fan having an internet connection.

To be honest, the journey hasn’t always been easy.

Our sport is full of good-old-boy mechanics, masters of their art just as expert as the mechanics of NASCAR and Formula 1 racing, only they have a far more unpredictable vehicle and environment to manage. For many years they relied on instinct to understand past results and how to improve. They based decisions on what they thought would be the best propeller, the correct pitch, the right engine fix–not on actual metrics. We often heard statements like, “I don’t need the data, I know how things work.”

It’s been fascinating to see even the most fervent objectors come around. Now, when there’s a potential problem, our chief mechanic says, “Where’s the data? Let’s take a look at it to see what happened, then we can figure out what to do.” The thing is, the data never lies.

And quite a lot of data it is. Some 100 sensors monitor SilverHook’s speed and course, electrical system, engine performance, fuel burn and the inertia of the waves’ impact so as not to damage the equipment. We also track ocean currents and the weather for wind patterns, storms, the sea state and the fetch of the ocean, combining all this with historical analysis of maintenance records, service notes and other unstructured information.

Assimilating these data points via the IBM Watson IoT Platform into a predictive cognitive solution lets us optimize the boat’s path, increase the boat’s sustainable speed and improve the safety of the pilots and the accompanying medical staff, patrol boats and patrol aircraft. The technology helps to transform the sport all around.

Here’s an example of the system in action. In the World Championships with three laps to go, we were in third place when one of the engine alternators started sending erratic signals. The analytic platform compared the signal to what is typical and inferred a problem in the making. The solution was to switch the charging system so the good alternator could charge both engines, but the pilots were too busy with the race for this analysis.

The platform discovered the solution, and, using a feature we call Watson Whisper, created an advisory text, converted it to audio and sent an alert to the pilot’s earpiece. Without the alert, a failed battery would have caused the engine to cut out and we’d have idled embarrassingly to the finish line. As it turned out, we lost about two seconds on the way to a podium finish.

We trust that by bringing this technology together and sharing the experience with people across the world, we can inspire the next generation of innovators. In the digital world, the possibilities are only limited by your imagination – that’s what I think our world-record run and the data behind it show.

For more details about the tech behind SilverHook’s world record, visit Part 1 of this blog series. 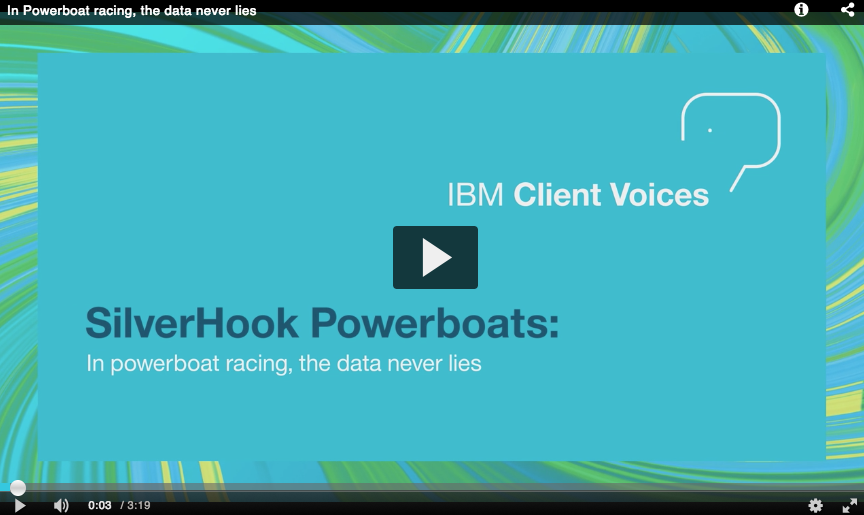